Visit the Most Popular Museums in Branson, MO

Take a field trip to a museum! Branson is not your typical small town, and neither are our museums. Sure, there are only around 12 thousand that live here, but we just happen to have a few million visitors annually too, and that gives us the uniqueness to branch out a bit. We are going to take a quick ride to see a few great options that will make your vacation more exciting.

Of the touristy museums, the Titanic Museum Attraction is the creme dela crème and you will be lucky to find a spec of dirt in this pristine exhibit. The structure on Hwy 76 is a landmark nowadays to help guide wandering tourists and its noon horn bellows daily to remind locals that it’s time to eat.  It’s within this majestic behemoth that rests a heart of intrigue and emotions. From an exact replica of the grand staircase to the intricacies of the engine room, there are many angles to stimulate many interests. Take some Kleenex with you; it can be rather emotional as little by little you venture through the timeline of that fateful night that saw some 1,500 lives swallowed into the body-numbing depths. You can even experience that numbing with a bowl of water that was the same temperature that night – dare you to plunge your hand in there above your wrist for about a minute. From actual artifacts to meeting crew members in uniform, the Titanic Museum Attraction is a unique, moving experience. Yes, there are crew members that attempt to speak with an Irish or English accent, but since they are from the Ozarks, there still might be a “you all” tossed in there to keep you grounded on the ship.

When it comes to “museum” attractions, the best bang for your buck is Beyond the Lens, like the lens of a camera. Loaded with high-tech interaction and playthings from giant video games to virtual reality, there is also actual history in there of the last 60 years to keep the family occupied for hours. You can stroll through and see the most sensational news stories and people of the last decades from crimes of the century to pop stars and movie stars. Relive the moon landing of 1969 to seeing different scenarios of the Kennedy assassination of 1963. See the inventions of the decades to what is to come, cut the rug with old famous dances up to today, and test your knowledge of a variety of people and events. Spy on the movie star houses with a satellite view of Hollywood, or hangout in the Oval Office and around Buckingham Palace after you’ve stood at a podium of a White House news conference. There is far too much to explain, and there is almost too much in this attraction. Here’s the kicker: it’s owned by the National Enquirer. Now you know what I mean by the big stories and people of the last 60 years. It’s loads of fun and a bit overstimulating, so feel free to take a breather and just read a few things during your self-guided tour. 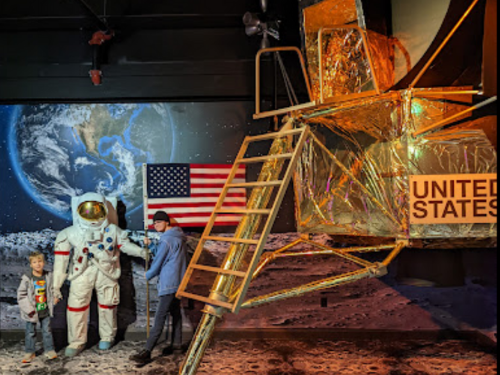 After all that touristy excitement, slow down a bit and get to the root of this area. Tucked away in downtown old town Branson, is the Branson Centennial Museum. This is your typical small-town museum but it’s unusual; it’s about one of the strangest occurrences in US history: a small town in Missouri becoming an entertainment mecca. Established not long ago in 2012 as part of the 100-year celebration of Branson, this little place will enlighten you to how Branson got to where it is along with a lot of what it used to be. Not many realize how important the White River was to this town and tourism or how it flooded it so often. Not many know who or what local old time, civic leader helped kick start us and kept kicking. Few locals know the obstacles prevalent in these parts way back when and it wasn’t just traffic congestion.

The centennial museum is run by the White River Valley Historical Society established in 1961 and is dedicated to preserve, protect, and promote the cultural history of the upper White River Valley, concentrating on Taney County, Missouri. They also host a variety of special event exhibits that will make you go “hmm.” I’m not saying that it’s an amazing museum that will leave your jaw wide open like so many of the locals, but it is free, and it does allow you a moment to reflect and gain some understanding of how we became what we are, and why we welcome tourists.

Branson history and museums reach across the globe, and few people reached as far in the good old days as an eccentric young lady who broke many barriers for women: Rose O’Neill. That name might may not ring a bell but she was the best known, highest-paid, female commercial illustrator in the world, and was an advocate for women’s rights. Ms. O’Neill traveled the world and was the creator of the beloved Kewpie Doll, yet managed to settle at her Bonniebrooke Home that still rests just north of Branson.

Rose turned many heads when she would stroll into the Branson General Store in pants to purchase a cigar, but a favorite tale is when she would do an interpretive dance “just because” before a movie at the town theater, according to an old local now long passsed. Eccentric, unique, and one of a kind. Her home and original art are as fascinating as she was and available regularly to tour. Bonniebrooke Home & Museum/Historical Society and Kewpie Museum will allow you into the sometimes tortured mind of Rose and will for certain give you a taste of how life was in the late 19th and early 20th centuries. It’s a fascinating place and found only near Branson yet it is known around the world by art and history buffs.

By no means should Branson be considered a hotbed of culture when it comes to museums. Yes, we borrowed from elsewhere to help us make a living with touristy museums, but this former hole-in-the-wall town is a living museum of adaptation and evolution. Our culture and history are dramatically different than most, yet there is still a chance to reminisce and wonder on different times while on your field trip.