The Most Haunted Places in Branson, Ormond Beach and Hilton Head

Have you ever had the feeling you were being watched? Have you felt something that wasn’t there? With Halloween upon us people just love to hear a good ghost story. It’s time to share some haunted stories from Branson, Ormond Beach and Hilton Head. It’s up to you to decide if you believe them or not.

The ghosts of Branson wander in the most unlikely places so don’t be surprised if you feel or see something unusual. The Fire in the Hole ride in Silver Dollar City was built in 1972. It remains in operation today. (Image above is part of the ride attraction)

People claim to pick up a mystery passenger halfway through the ride. If there is an empty seat next to you, see if a passenger joined you mid ride! At the end of the ride you will see a light and the seat becomes empty again. When maintenance workers inspect the track they claim to hear distant screams. Theme park guests and other workers have claimed to hear sounds, feelings, cold spots, and hear voices that can’t be explained. You’ve heard the expression “Fire in the Hole”. This gives it a whole new meaning. 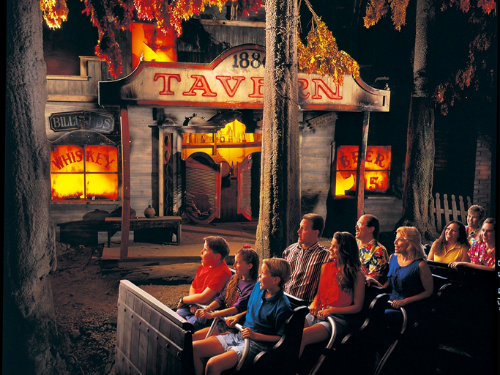 Fire in the Hole ride

Another interesting place you may want to visit is the Titanic Museum in Branson. The Titanic Museum is considered a “living museum”… why? It has the largest collection of authentic artifacts in the world that came from the ship. Many souls were lost on that fateful night. The spirits of those who perished are probably attached to these artifacts.

On a regular basis the workers clean the museum because tourists touch the displays. The odd part is what happens when the museum is closed. When workers arrive for their shift the next day, they find fingerprints have mysteriously reappeared on the displays. They must clean them before guests arrive. Workers have claimed to see wet footprints and ghosts in vintage formal wear. People who have visited claim they find strange appearances in their photos. If you go on the anniversary of the Titanic’s sinking on April 14 or 15 your chances of being a witness to this activity seems to be better.

The Branson Titanic is open to the public. You can purchase a ticket with the name of one of the passengers. Take the self-tour and see if you one of the lucky ones who survived or not. It is a unique experience that you need to see for yourself.

Is it a Mystery or a Ghost Tale in Ormond Beach?

Not far from Ormond Beach are the New Smyrna Ruins built in 1830. The ruins are a true mystery.

Some historians believe the ruins were the creation of English setters hoping to establish a colony in 1768. Due to disease, death and attacks from Native American tribes the structure wasn’t finished. There is a plaque at the site commemorating the destruction of the Sheldon House. It was a 40-room hotel built on top of the ruins in 1854 by John D. Sheldon. During the Civil War the hotel was destroyed. In 1867 Mr. Sheldon managed to build the hotel from the remaining structure but in 1896 it was torn down.

Today the mysterious ruins are called Turnbull Ruins and they are said to be haunted. Seminole Indians (Native Americans and originally from Florida) or dark spirits called shadow people, creep around the trees at dusk and climb the walls and rubble of the ruins at sunset.

Make your way to New Smyrna, Florida. If you see the shadow people or dark spirit, who you gonna call? You decide.

There is a ghostly tale of the Addison Blockhouse Historic State Park located in Volusia County. A plantation owner named John Addison was buried on the grounds but the tombstone was later moved. The final resting place remains a secret.

Their property was sold and the new owners converted it into a sugar mill. In 1836 the site was burned during the Second Seminole War. What remains of the ruins today is believed to be the outdoor kitchen of the Addison plantation, partial walls and foundation of the sugar mill. Many people have claimed to witness paranormal activity here. Many people have seen a ghost of a six-foot-tall and heavy-set man. When boating and viewing the site people have felt the presence of the ghost. 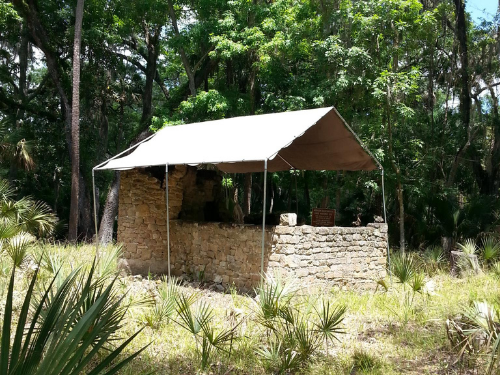 The remains of the Addison Blockhouse

Though restricted to public access, boaters can view the site from the Tomoka River. True or not it’s part of Ormond Beach history.

The Ghosts of Hilton Head, SC

In 1838 Jack Stoney lost his plantation in a poker game that was in the family since the American Revolution. The winner of the poker game was a wealthy plantation owner named William Baynard. He lived in the house with his family until his death in 1849. He was buried nearby in the family mausoleum.

Around the time of the Civil War, Union soldiers used the Baynard Plantation as headquarters. The home was then raided and burned by the Confederates. There were rumors that the Baynard mausoleum had valuables such as jewels and gold. Union soldiers broke into the mausoleum and stole the heirlooms.

For the true thrill seekers, go hiking right after dusk or nightfall and visit the Baynard mausoleum because visitors have reported seeing William Baynard’s ghost walking the property. Others have seen a funeral procession with a horse and carriage rolling past the house. Here’s a tip, don’t forget to take a flashlight.

Have you heard of the Leamington Lighthouse (also known as The Rear Lighthouse of Hilton Head Range Light Station)? This story may be a treat or trick depending on your sixth sense.

Through the 1890s, a father and daughter team named Fripp took care of the lighthouse. Mr. Fripp was dedicated to his job as lighthouse keeper and making sure ships arrived safely to port. In 1898 there was a powerful hurricane that struck the coast of South Carolina. A ship was getting to close to shore and Mr. Fripp struggled to keep the ship safe. He kept the lighthouse flame lit throughout the storm. Unfortunately, he suffered a heart attack because of the stress and fell from the lighthouse tower ladder. Caroline Fripp rushed to her father’s aid. She made her father a promise to stay at the lighthouse and keep the ships safe. That night she was wearing a blue dress and in mourning spent the that night going between the cottage and the lighthouse tending to the flame. As she continued to grieve she refused to take off the blue dress and it is said she died a few weeks later and was buried in the blue dress. 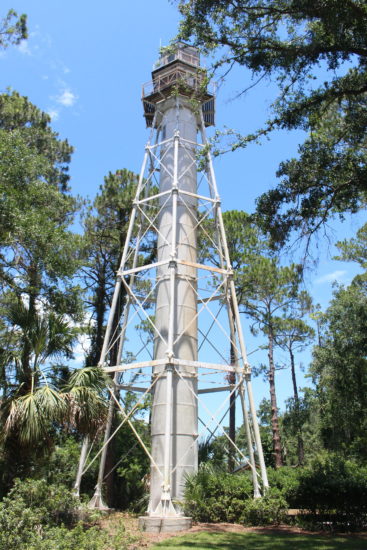 There are reports of a woman in a blue dress pacing the lighthouse whenever there is stormy weather or dark skies. She is known as the Blue Lady of Palmetto Dunes. If you happen to see the ghost of Caroline Fripp let us know.