On the last Thursday of November 1861, just a few weeks after the Battle of Port Royal Sound, Thanksgiving Dinner with food and memories of family, was celebrated on Hilton Head Island and in the Lowcountry by New England soldiers in the Union Army that occupied the area.

The regimental history of the 3rd New Hampshire Volunteer Infantry  records, “The last Thursday in November arrived – the time when we were wont, at our peaceful homes, to lay aside the cares and duties of every-day life and give ourselves up to pleasure, relaxation or religious service, or perhaps a little of each..” 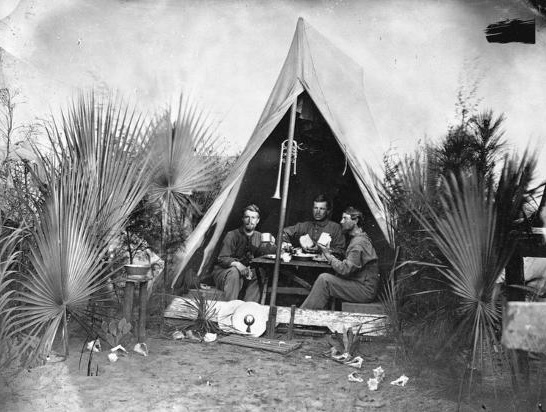 The next year, in 1862, the 3rd New Hampshire history states that it was a day of “The 27th was the old-fashioned New England Thanksgiving.”

Another soldier on Hilton Head recorded that the day was celebrated with, “Baked beans, greased pig, base ball”. Note that baseball was two words.

Thanksgiving Dinner was served on Hilton Head in 1862, but it was at nearby Fort Pulaski that the biggest Thanksgiving Day celebration was held. Officers and their wives stationed around the Lowcountry were invited to the festivities.

As recorded in the regimental history of the 48th New York Volunteer Infantry stationed at the fort, ” … there never was a day of sport in the history of the regiment to be compared with that of Thanksgiving Day, Nov. 27, 1862. Three steamboats loaded with guests, including Generals Brannan and Terry, arrived from Hilton Head. We had a sermon by the chaplain in the morning. There was target-shooting, boat-racing, foot-racing, climbing of the greased pole, catching of the greased pig, wheelbarrow races, sack-races, hurdle-races, and finally a grotesque dress-parade, and a great supper, and in every sense a high day.” The account ends with, “It was the most memorable day of festivity in our entire career.”

In 1863, for the first time a National Day of Thanksgiving was proclaimed by President Abraham Lincoln. President Lincoln’s Proclamation stated, “I do, therefore, invite my fellow-citizens in every part of the United States, and also those who are at sea and those who are sojourning in foreign lands, to set apart and observe the last Thursday of November next as a Day of Thanksgiving and Praise …” This proclamation took the New England Tradition and made it an American Holiday.

On that first official Thanksgiving, the 3rd New Hampshire history recorded that, “Thanksgiving Day arrived, 26 November. How the time had sped! Would we ever go home? Would we be in New Hampshire next Thanksgiving? We hoped so; and long before that, too. The day opened cool. Beans for breakfast! How’s that, ye homestayers? Did ye get better, in New Hampshire? The bakery did its part, and yielded us soft bread; and we had hard-tack pudding, duff, etc., for dinner.”

A note in the local newspaper reported that for soldiers in the Lowcountry, “Yesterday being Thanksgiving, landmark to all Yankees … this first Yankee Thanksgiving on Folly Island.”

In 1864, the Union League Club of New York came up with a plan to provide a Thanksgiving dinner to every soldier and sailor in the Union Army on November 24th. The main challenges were to organize the donations pouring in from every Northern state, and keep the food from spoiling.

The 3rd New Hampshire history recorded that, “Thanksgiving arrived but no celebration for or by us … We had anticipated something out of the usual course during the day for our stomachs; but fate was against us. The “goodies” arrived next day, and we ate turkey meat and chicken ditto, and fruit, and so on the 25th. It is hardly necessary to state that these good things were sent us by friends at the North.”

The Union Club of New York would publish in a report on “Providing Thanksgiving Dinner” that stated: “It was estimated that at least 373,586 lbs. of poultry was provided for the occasion, in addition to “an enormous quantity of cakes, doughnuts, gingerbread, pickles, preserved fruits, apples, vegetables, and all the other things which go to make up a Northern Thanksgiving Dinner.”

Thanksgiving continued across the United States but as Diana Karter Appelbaum puts it in her history of the holiday, presidents and governors could declare days of Thanksgiving, but “family reunions, pumpkin pies, and turkey dinners were customs that Southerners had to be taught.”

By 1890, the Charlotte, NC, News observed that, “With each succeeding year, the observance of this day has grown more general until now it is second, as a holiday, only to Christmas.”