Provide for the Common Defense: The Forts of the Lowcountry

On your visit to Hilton Head take time to explore some of the rich history of the area with a side trip to explore one of the many old forts in the Lowcountry.

In a time when defending the United States meant protecting the Atlantic and Pacific coastlines from attack, forts were the primary means of coastal defense. Many of these forts in the Hilton Head region are still standing and open to tourists.

During the Civil War, the Confederate Army built Fort Walker on the northernmost point of Hilton Head Island. Fort Walker was built to defend the entrance to Port Royal Sound, but when attacked by a combined United States Army/Navy force in September 1861, they abandoned Fort Walker in less than 5 hours. Taken over and rebuilt by The Union Army, the fort was named Fort Welles. Around Fort Welles, the Union Army built a large base, military hospital, and Wharf. Abandoned after the Civil War, the walls and buildings of Fort Welles fell into disrepair, and what was left was wiped out in the hurricane of 1892. Markers on the site tell the history of the site. Remains of the original earthworks of the Fort Welles are visual. Next to the fort is a street of stores and saloons that was known as Robber’s Row. The name was later changed to the Robber’s Row Grille, located at the Port Royal Golf & Racquet Club.

On the Fort Walker site, visitors can see the remains of the Hilton Head Steam Gun. The steam gun was an experimental cannon that fired an explosive dynamite charge by compressed air. The cannon was known as the Steam Gun because steam generators on the site created the electrical power that ran the air compressors. The cannon was installed in 1901 and dismantled in 1904. Parts of the turret cannon, steam piping, and boiler rooms are still visible today. 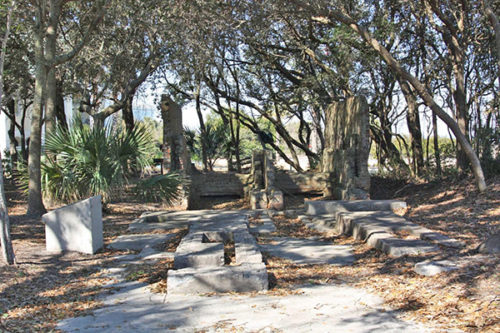 Near Fort Walker is Fort Howell, built-in 1864 to protect Mitchellville. Federal regiments, one African American (the 32nd United States Colored Infantry) and one white (the 144th New York Infantry) built this field fortification as a significant late-war addition to the defenses of Hilton Head, part of the Hilton Head District, Department of the South. Fort Howell, an essentially pentagonal enclosure constructed of built-up earth, is quite discernible despite natural erosion and the growth of trees and other vegetation for almost 150 years. Today, it is a historic site open to the public with adjacent areas for parking and several interpretive signs. Fort Howell is one of the most intact and best-preserved Civil War field fortifications in South Carolina. Fort Howell is free and open to the public year-round during daylight hours. Fort Howell is located at 160 Beach City Rd, Hilton Head Island, SC 29926.

Overlooking Skull Creek, the Union Army built Fort Mitchell. Built in 1862, the fort was designed to house five or six heavy guns and was positioned strategically to control Skull Creek and protect the approach to the U.S. Navy coaling station at Seabrook Landing. Today, signs note points of interest throughout the site, and there are several era-appropriate cannons stationed in along the park walk way. Fort Mitchel is located off of Skull Creek Drive, adjacent to the waterfront inside Hilton Head Plantation. A gate pass is required to get in and can be picked up at the entrance guard post. Parking is available in the turn-around off of Skull Creek Drive.

Just north of Hilton Head, but all the way around and through Port Royal, Beaufort, and Lady’s Island to St. Helena Island is Fort Fremont. The fort built in 1899 defended Port Royal and Beaufort, which remained critical to the United States during the Spanish American War. Today Fort Fremont Preserve has walking access to the historic batteries, a maritime forest, and high bluff coastal views of Port Royal Sound. The History Center is open Fridays from 10:00 a.m to 2:00 p.m. and Saturdays from 10:00 a.m. to 4:00 p.m. Docent-led tours are every Saturday at 11:00 a.m. and 1:00 p.m. The Fort Fremont Preserve is open Monday to Sunday from dawn to dusk. Fort Fremont is located at 1126 Lands End Road (State Rd S-7-45), Saint Helena Island, SC 29920.

South of Hilton Head is Fort Pulaski, built to defend the port of Savannah. The fort was completed in 1847, after 18 years of construction and nearly $1 million in construction costs. Fort Pulaski was seized during the Civil War by Confederate forces in 1861. In April 1862, Union forces took the fort back and closed the Port of Savannah. Many officers assigned to Fort Pulaski moved their families to nearby quarters. They furnished these quarters with chairs, tables, and even a piano that was from homes abandoned in Bluffton. Fort Pulaski remained an active army base after the Civil War, but by 1900 the fort began to fall into disrepair. Fort Pulaski was named a National Monument on October 15, 1924 and transferred from the War Department to the National Park Service on August 10, 1933. As a WPA project, members of the Civilian Conservation Corps began rehabilitation of the fort that same year. Fort Pulaski today dates from the Depression Era repairs. Fort Pulaski is a National Monument and part of the National Parks System. The fort is open from 9:00 a.m. to 5:00 p.m., seven days a week (closed on New Year’s Day, Thanksgiving, and Christmas). There is a fee to get in. All US Veterans qualify for a free lifetime family pass. Visit Fort Pulaski at 101 Fort Pulaski Rd, Savannah, GA. 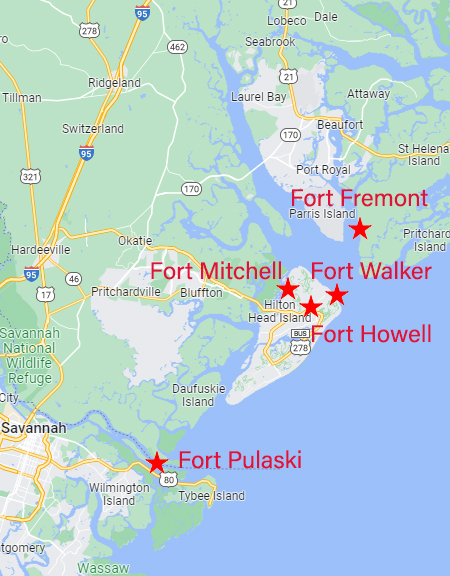