Always Awesome Autumn in Branson and the Shows for 2019!

It’s Triple-A season in Branson with “Always Awesome Autumn” for a major league time in the Branson Ozarks as the trees turn, the temperature is near perfection, and the shows are polished. Often autumn is amazing with the views and superb entertainment.

September and October is show-time with the majority of the guests coming to town to hit the various musical productions. Attendance does a flip-flop from shows for kids/families and theme parks toward enduring music that cracks a home-run with experienced or discerning crowds.

Back again is the Broadway show “Million Dollar Quartet” at the Welk Theater. This theater, that seats 2,200, hosted SHREK the Musical for the summer crowd and is bringing back Million Dollar Quartet by popular demand and because most adults aren’t too interested in green ogres the way kids are.

Based on the event in Memphis when Elvis, Jerry Lee Lewis, Carl Perkins, and Johnny Cash were together at Sun Studio, the production features a nice storyline with great characterization and musicianship. The Million Dollar Quartet has traveled the country and has been wowing crowds in Branson for several seasons.

There are some new and new-again shows on the field for the fall. Shoji Tabuchi, who changed the face of Branson with the first big production show, comes out of retirement a few days a week at the Clay Cooper Theater in Sept/Oct.

Shoji is a legend in these parts and is noted for his talent and big shows. A hall of famer that has been dusted off and returned is “The Toby Show.” Created and performed in the 1960’s – 80s by another local legend, Shad Heller, it’s a cross between vaudeville and Hee-Haw with a great dinner, lots of family laughs and fun and it’s what set the pace in Branson for decades! 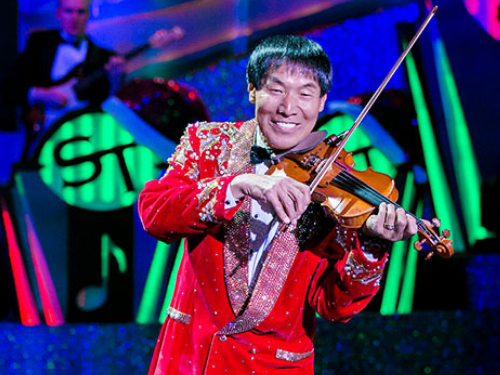 See Shoji Tabuchi perform this fall at the Cooper Theater!

To keep pace with adjusting demographics, two relatively new shows are back at it for the soon-coming-out-of-middle-age crowd: Parrotville Jimmy Buffett Tribute and the Fleetwood Mac Tribute. Their names say it all, so if you want to wear your flip-flops and “go your own way,” feel free!

Brand new on the theater circuit and just having made its debut is “ICE – Acrobats.” Yes, acrobats on ice (and I don’t mean a new drink.) It’s tough enough to do acrobatics on regular ground, but now the Chinese have taken it up a step in 2019 by spilling the mop bucket and turning down the thermostat for an Intriguing and colorful production.

Always Awesome Autumn months in the Ozarks are also when big stars head back to town for concerts. The Oakridge Boys are performing every Wednesday and Thursday at the huge Mansion Theatre through September and October. It’s the “real” Oaks playing their famous hits!

Also at the Mansion Theatre are some stars doing one-night-gigs, so book early! Neil McCoy will be jumping all over stage Oct. 11, and Gene Watson will be hanging out singing his best on Oct 18. You can see Ronnie Milsap Oct 19, then The Gatlin Brothers perform their big hits with tight harmonies Oct 25, and the Bellamy Brothers will be swooning the crowd on Oct 26. A couple of groups will be hitting some doubles like Daily & Vincent Oct 17 & 24; and The Country Family Reunion with Bill Anderson and Larry Black Oct 21 & 22.

Because these special event shows are RBI (Really Big Interest) they fill quickly, so book soon for bragging rights to the big shows!

Branson is bursting with beautiful scenery and big-league entertainment during Always Awesome Autumn. It’s the world series of entertainment options and colorful mountains. Besides, the kids are back in school and you have the town to yourself!